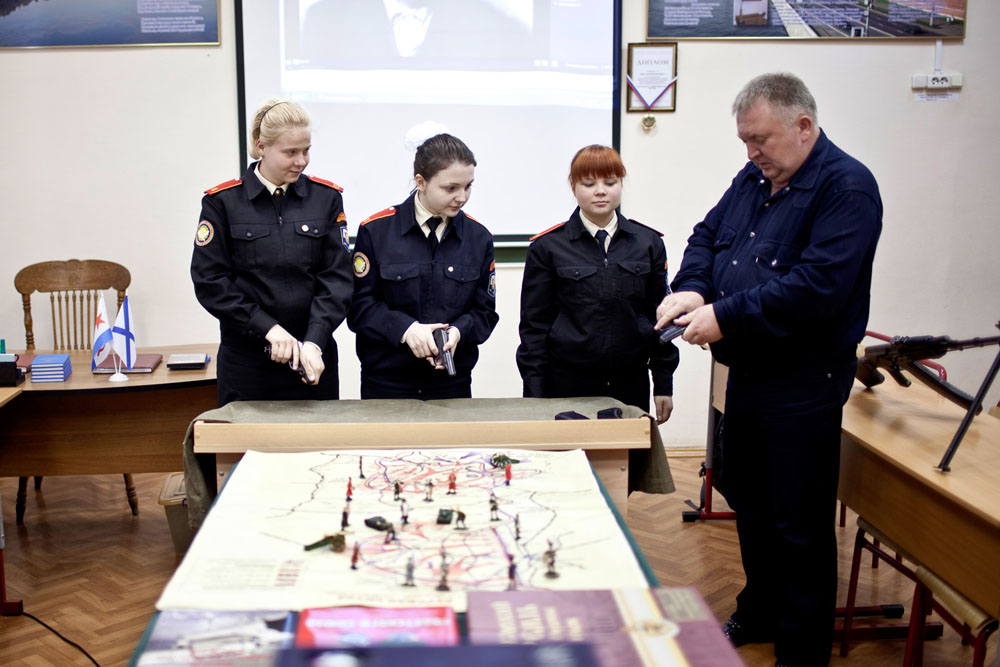 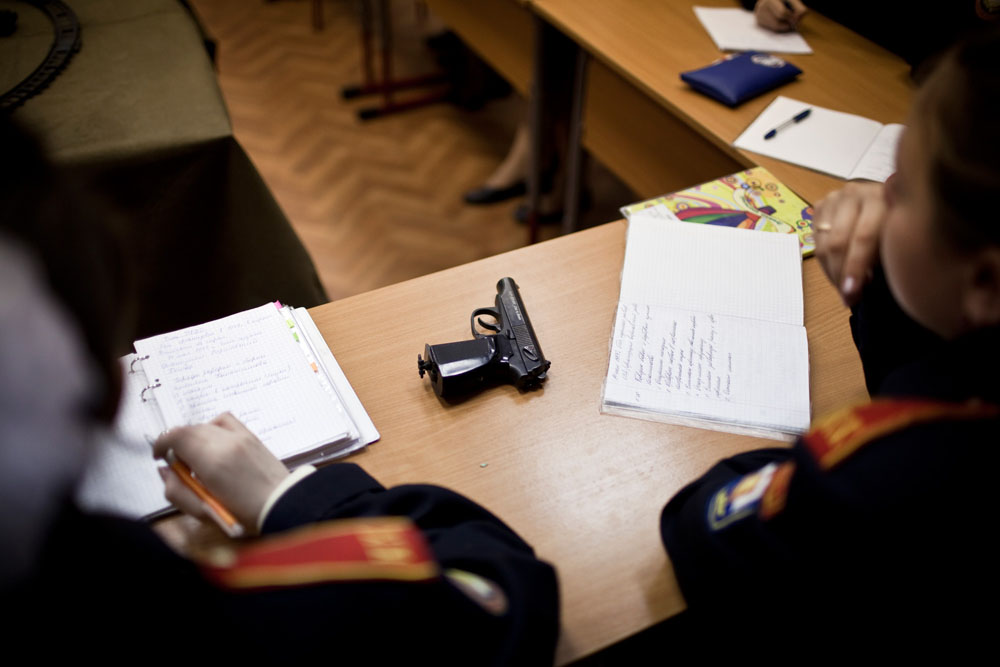 A handgun is laying on the table at the "Military and defence lesson". The girl are only allowed to leave the school-property on the weekends. Then they usually visit their families. 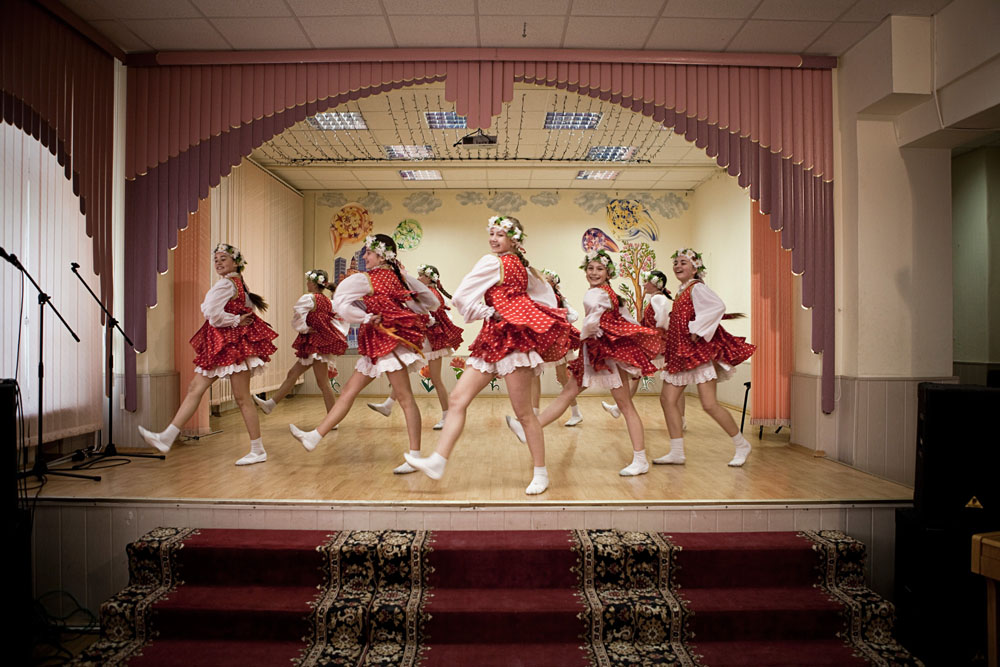 A group of girls are performing a dance. The school's dance-team is very succesful, and the director of the school is enormous proud of them. 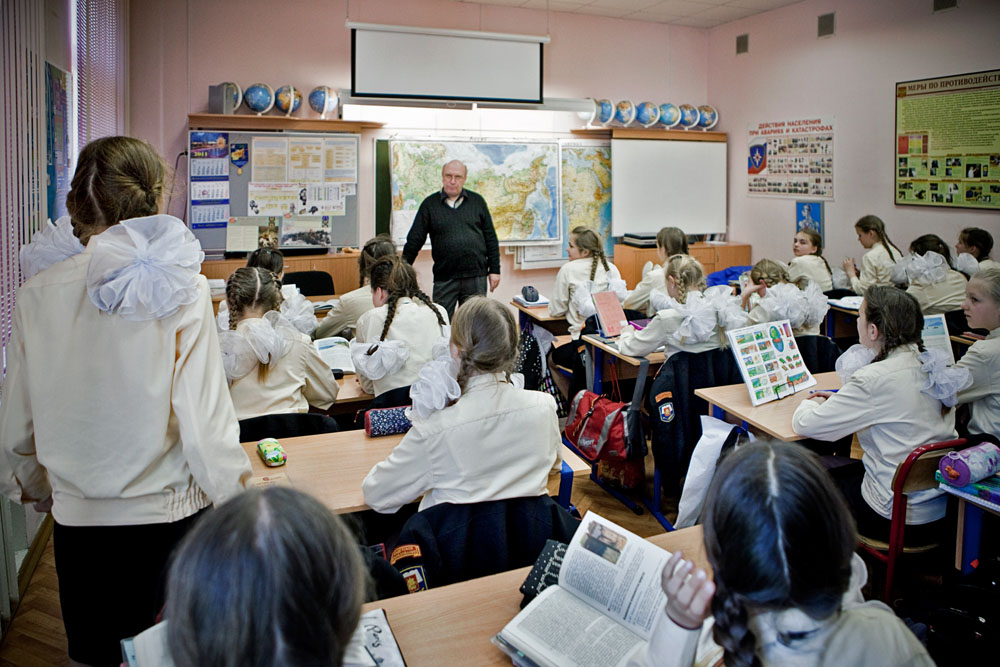 A the geography lesson 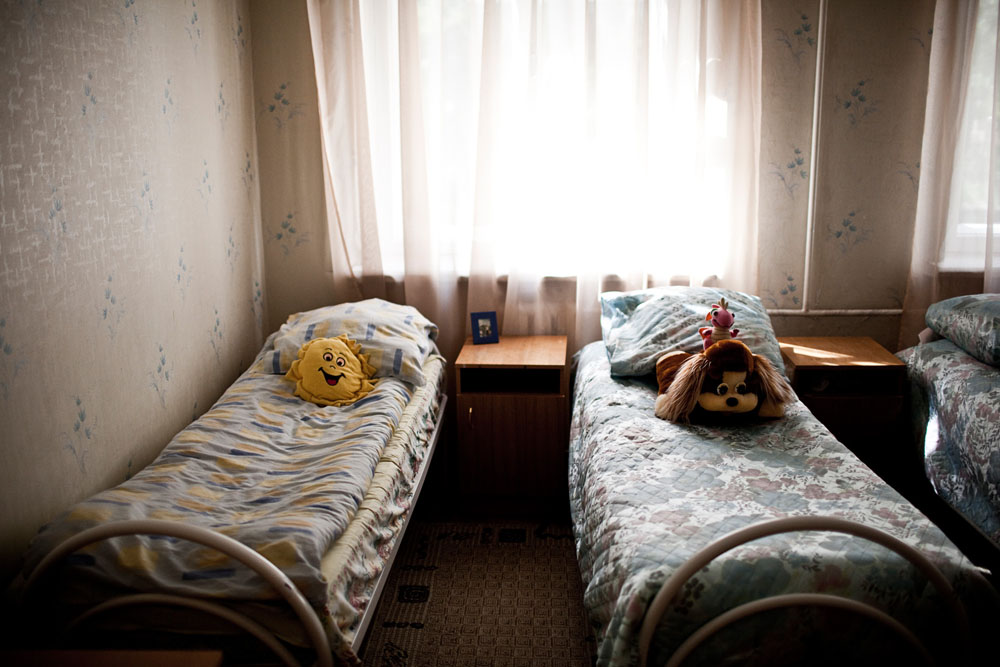 A sleeping dorm. There are between 3 and 6 beds per dorm. 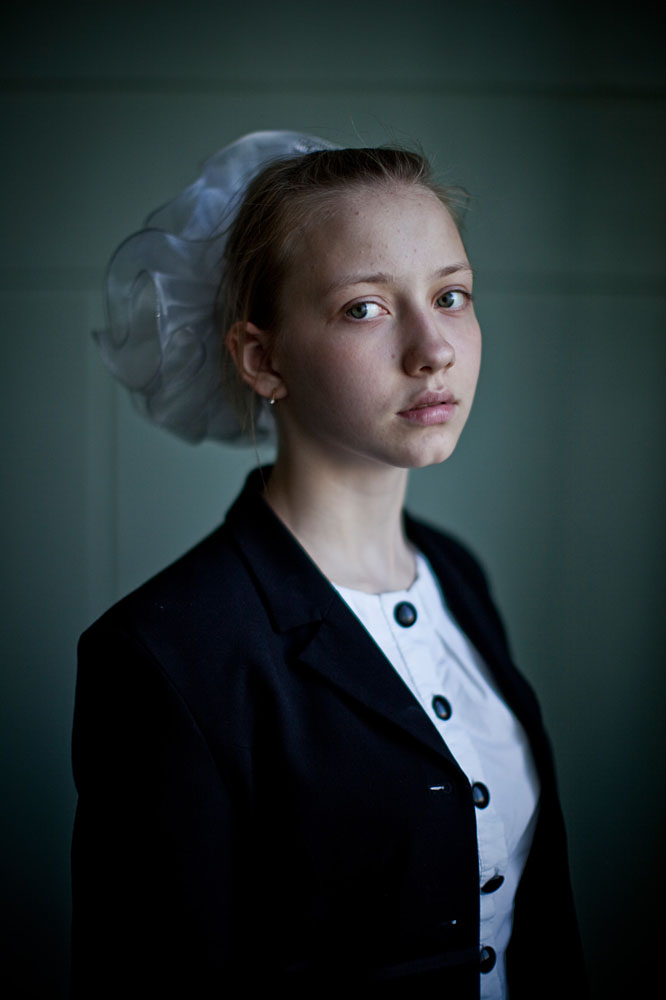 Portrait of a young cadet girl with traditional hair-dress. 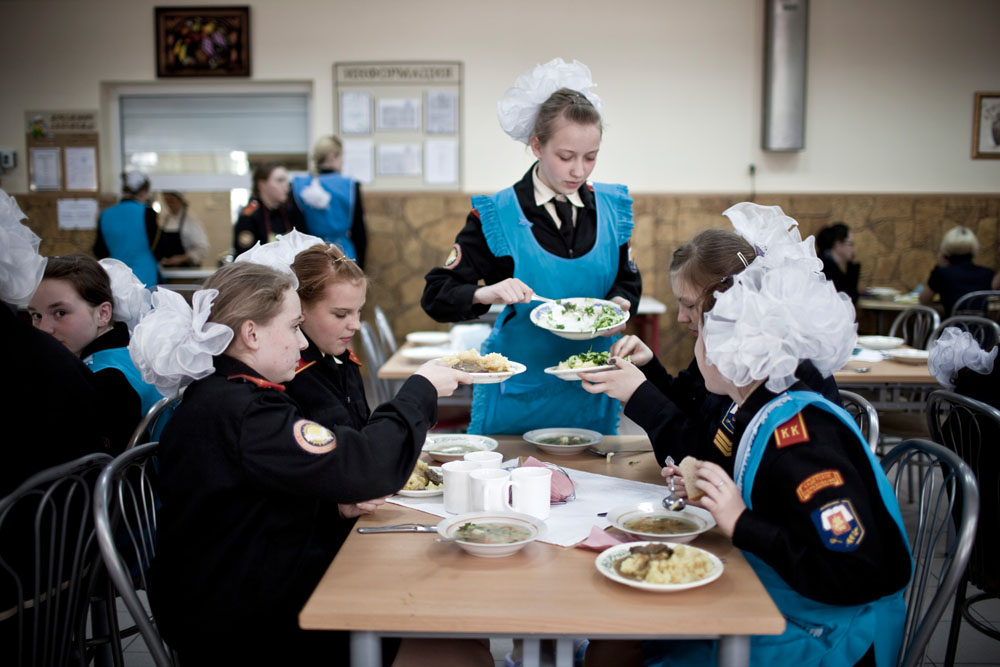 At lunchtime in the cafeteria of the school. The girls eat in two different shifts. 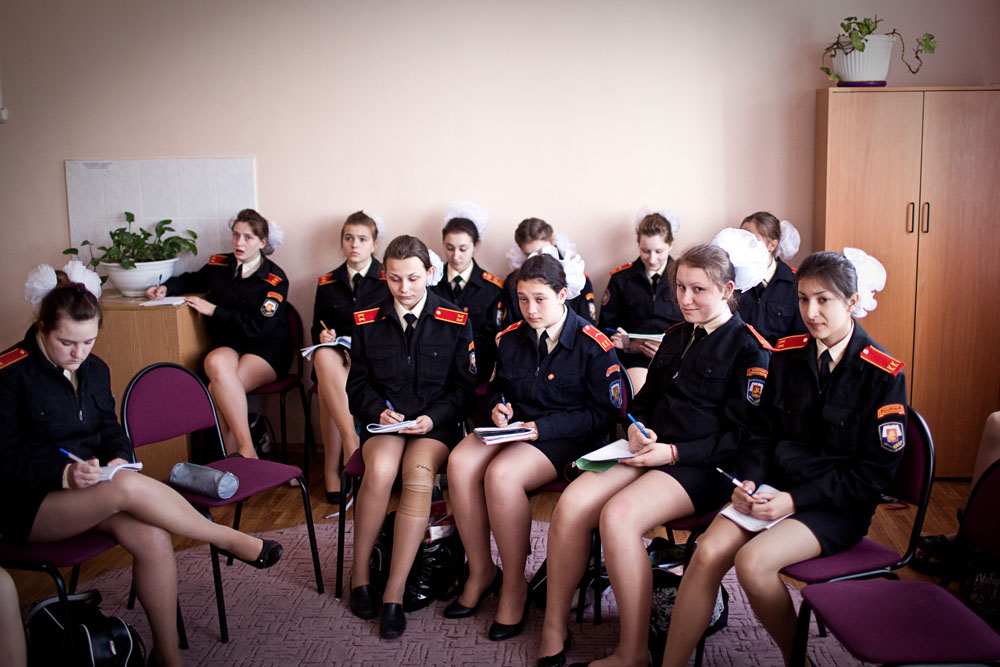 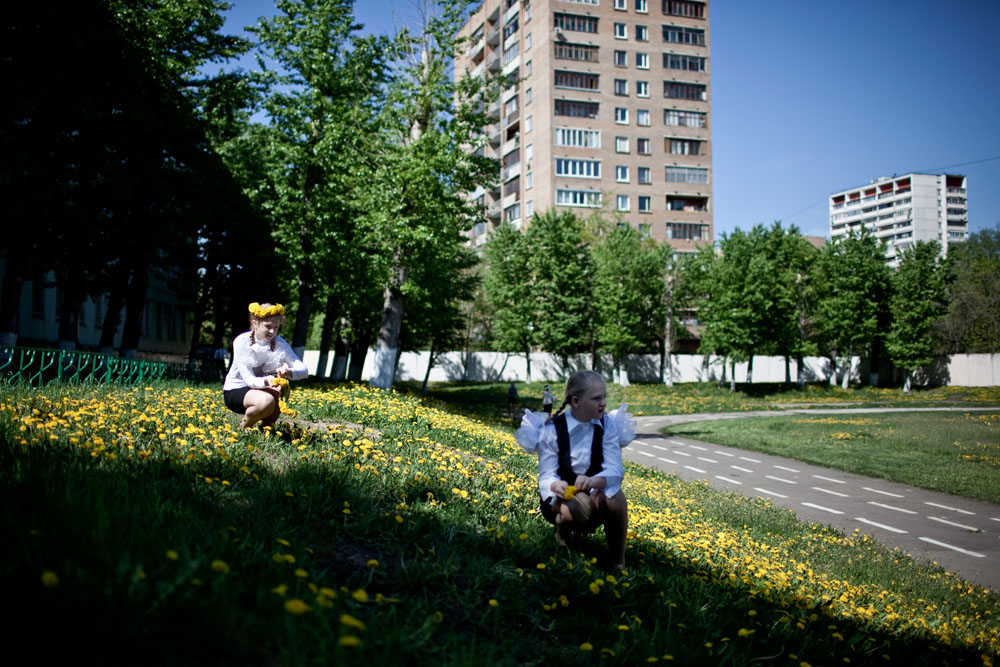 Girls are picking flowers in the schoolyard. The wall in the background in the schools boundary. The girls do not leave the terrain for 5 days every week. 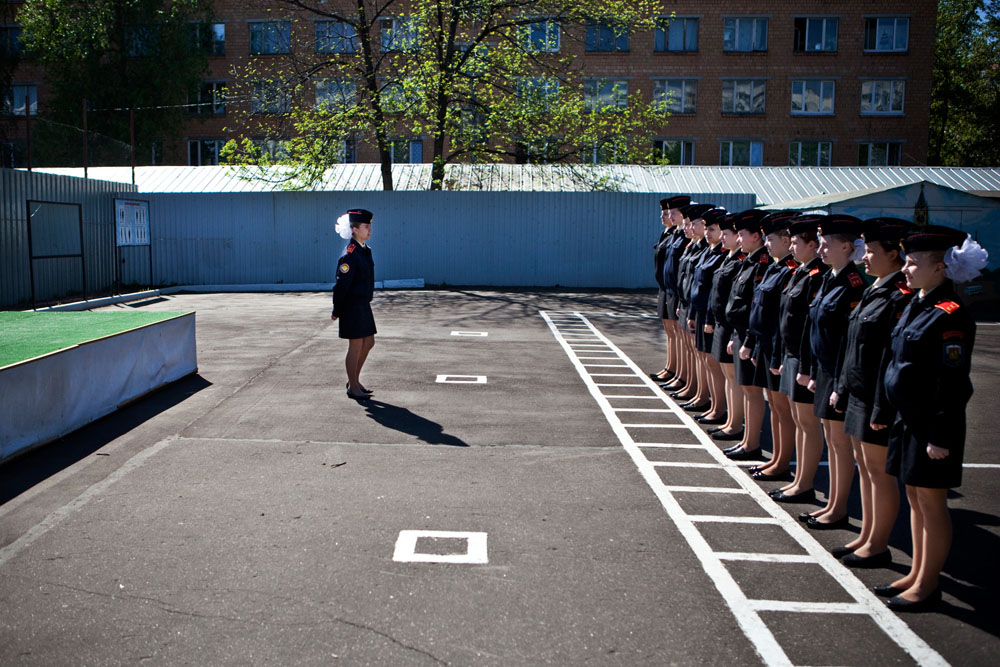 A group of girls is practising "marching" on the schoolyard.

Boarding School nr. 9
Visit to the worlds only female cadet school in Moscow

A young girl is cocking a Kalaschnikov in a classroom. Another girl is taking apart a Makarov-pistol. These are common exercises at the “Female cadet boarding-school Nr. 9”, which lies in the outskirts of Moscow.

In the schools schedule one can find activities like shooting, fencing, classical dance and a broad variety of other sports and activities. Additionally there are the obligatory subjects which are the same for every student in Russia.
The school keeps more than 1300 girls between the ages of 11 and 17, away from the streets. The school protects them from Alcohol and drug-abuse which is popular and wide spread among the Russian youth. If you can believe school principal Natalya Loginova, this is the reason why there have been eight times as many applicants as there have been available places in the past year.

In the last 15 years Russia has opened more than 50 cadet-schools, only this one is exclusively for girls. Most of these schools were founded in the nineties. A time when the war in Chechnya claimed many lives. To this day the girls with war victims in their families have a priority when applying at the school. “One hundred percent of our graduates gain access to a higher education”, says Loginova. Many join the police-force or apply at the academy of the ‘Frontier-guards’, were they are prepared for a career in civil service.

The walls of the little school museum are full of portraits with patriotism: female soldiers, Astronauts and the first woman who became a Cossack.