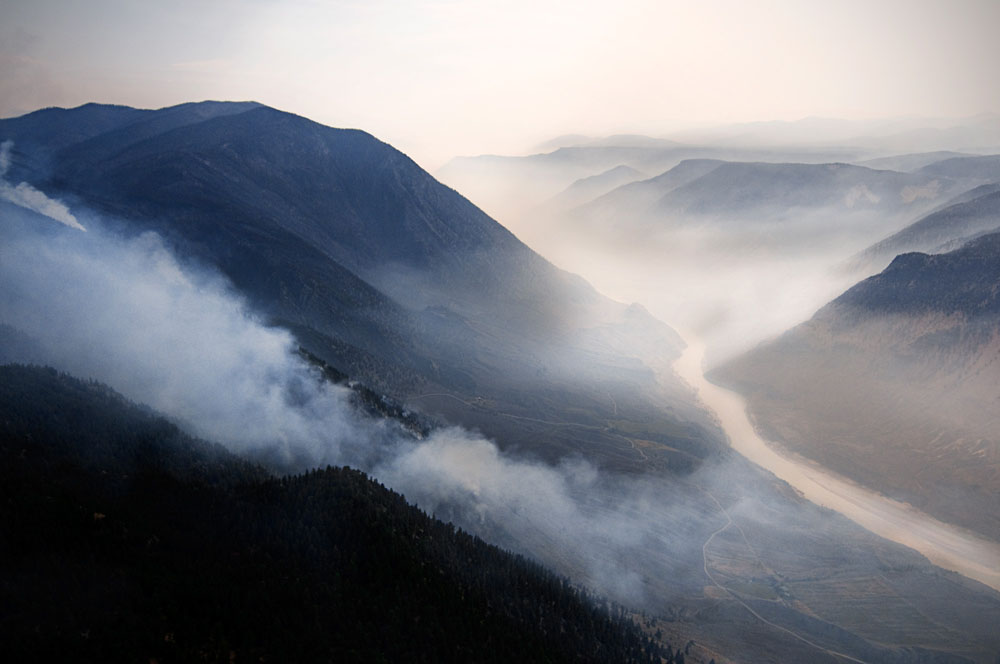 The valley of the »Fraser river« wrapped in smoke. The smoke was visible for hundreds of kilometres. 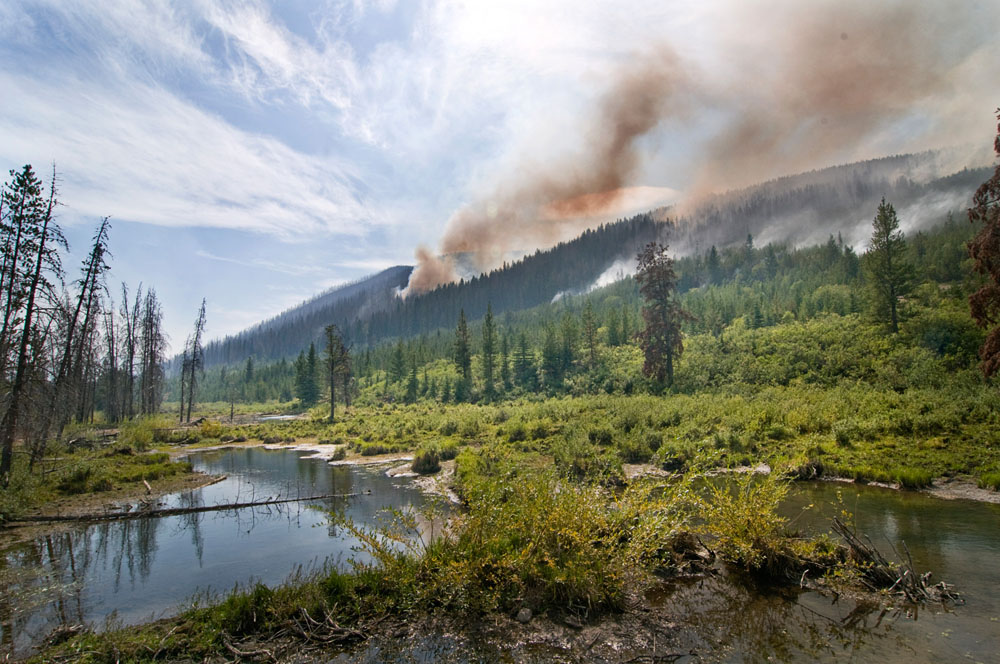 In the afternoon heat the fires flair-up and move rapidly fast. 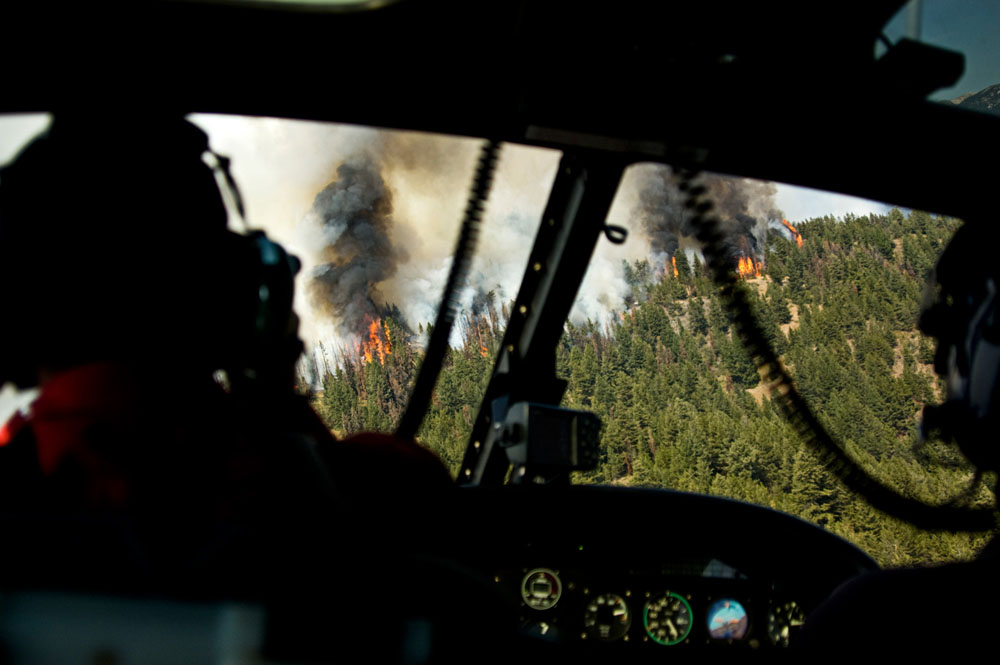 To estimate the fire’s behaviour, it is under constant observation. 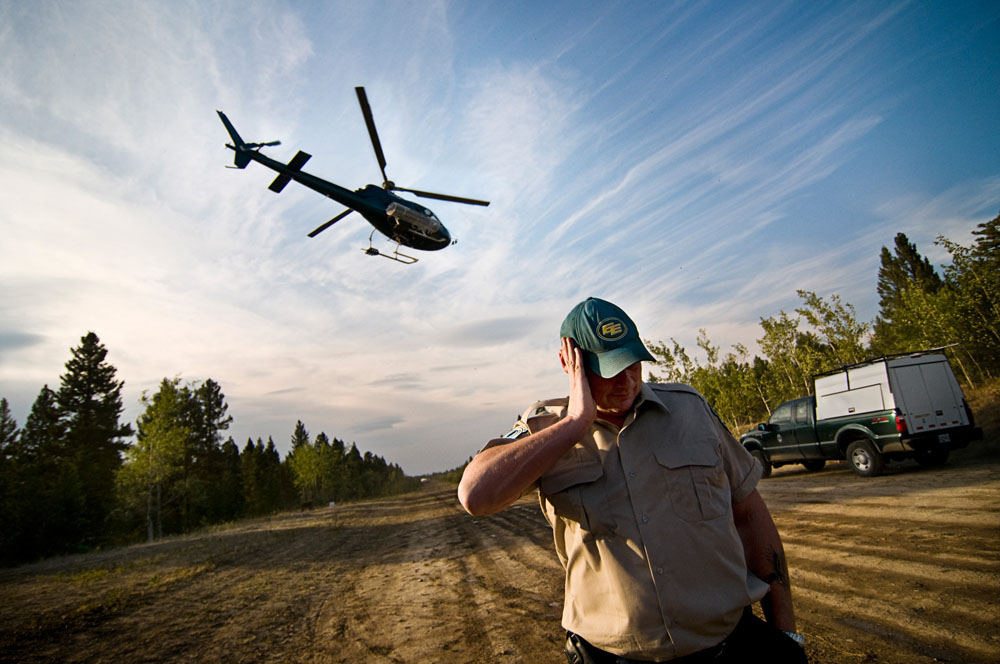 An engineer is protecting his face from the wind and dust of a taking-off helicopter. 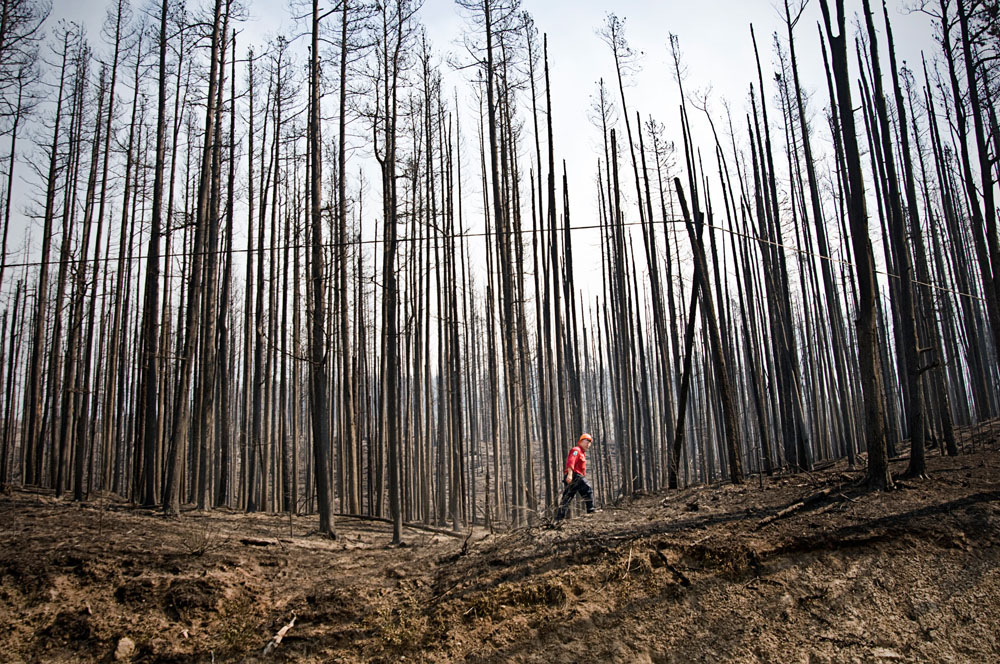 The pine-trees after the fire went through. The "Kelly creek fire" burned an a size of more than 200 square kilometres. 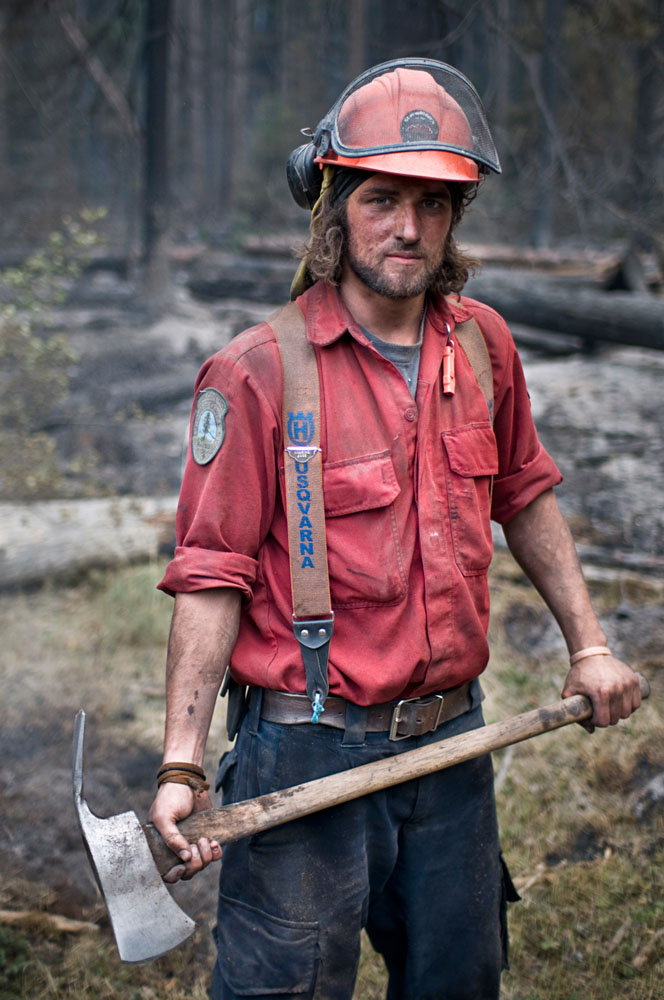 Portrait of a young firefighter. 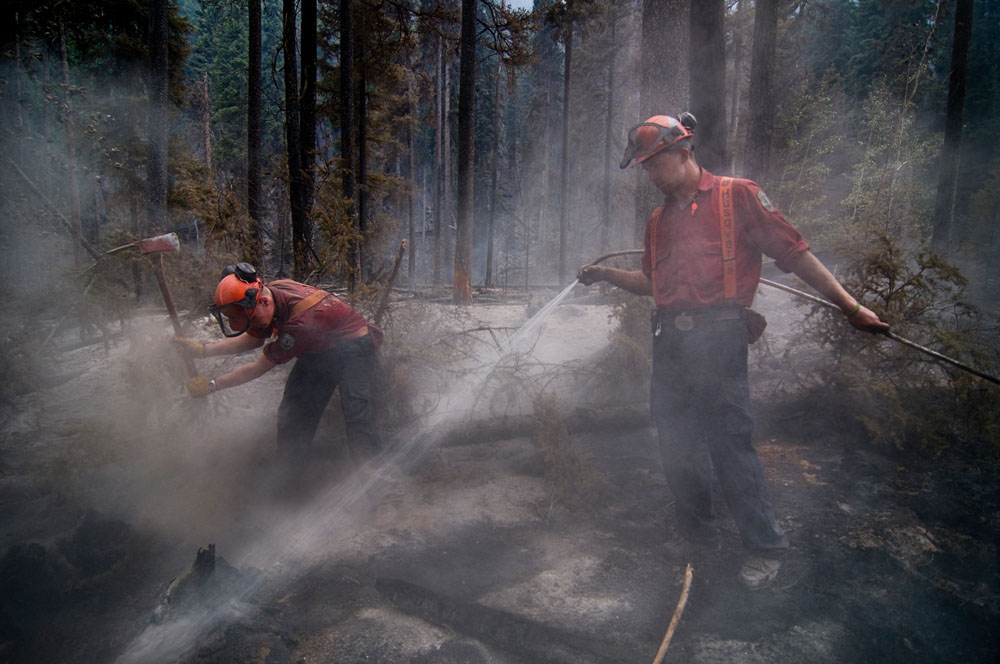 Two firefighters are digging out smouldering “nests” underneath the burned trees. These nests can survive a snowy winter and flare up again in the next spring. 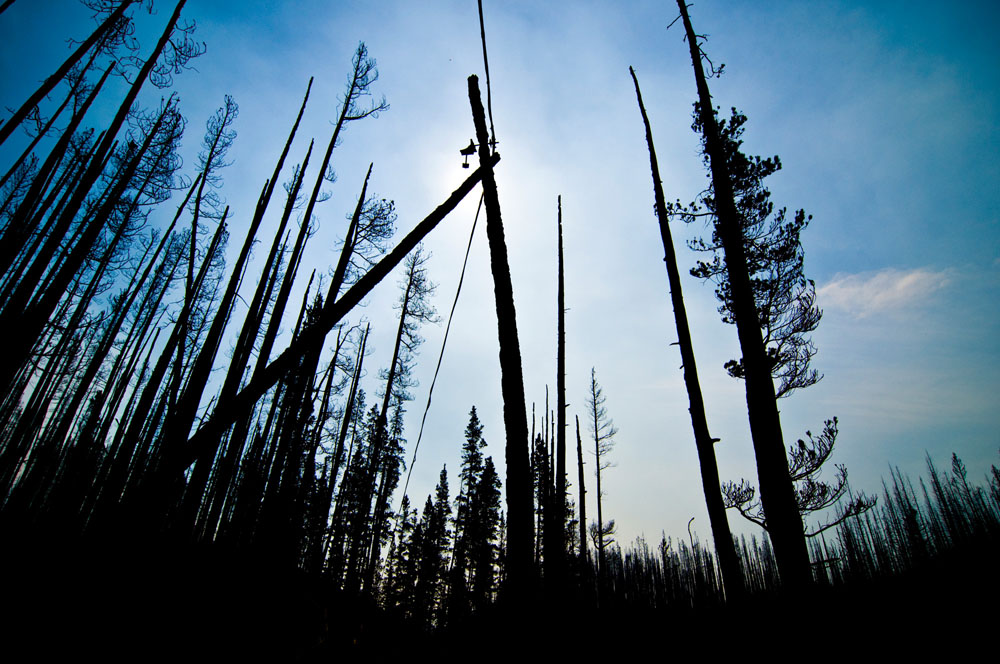 A burned telephone pole. All of the residents were evacuated. 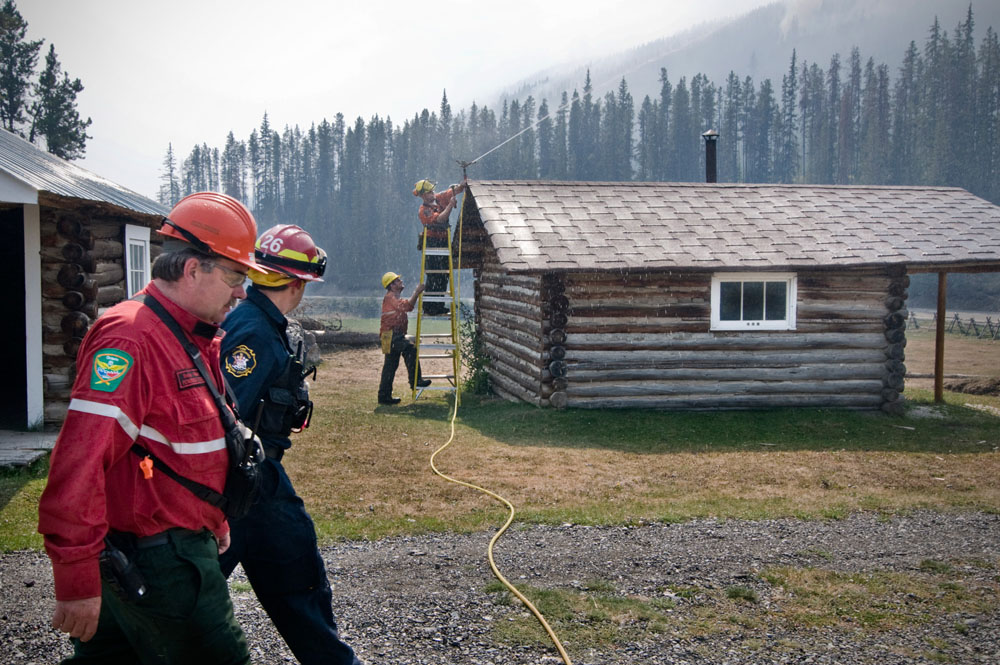 A special team from Ontario is setting up sprinkler-systems on the roofs of threatened houses. Those houses with a tin roof have a better chance to survive. 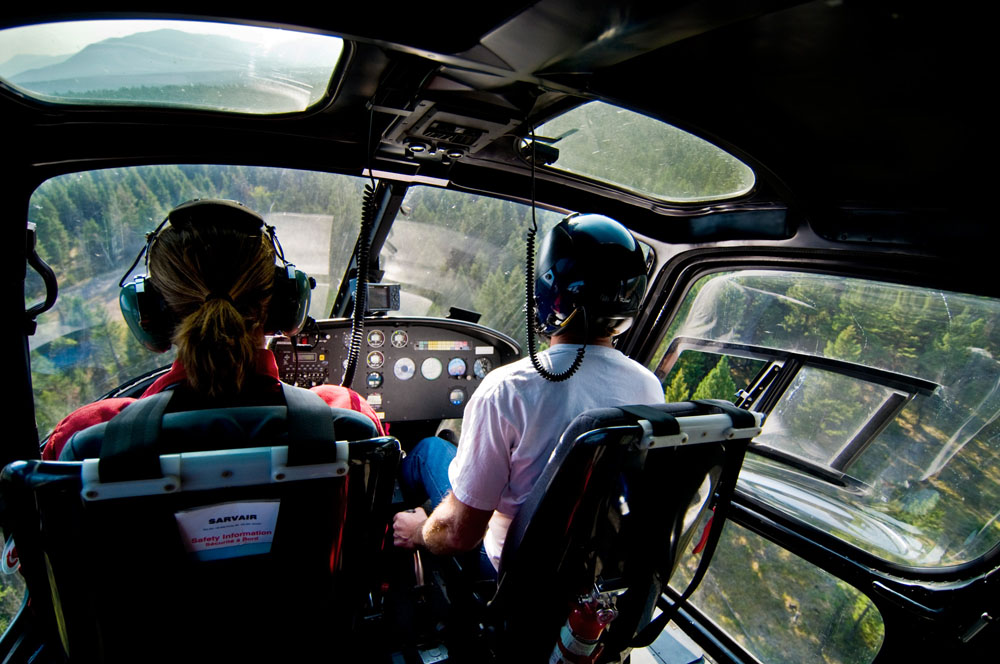 On a control-flight over the forest fire. 14 helicopters were involved at the Kelly creek fire. 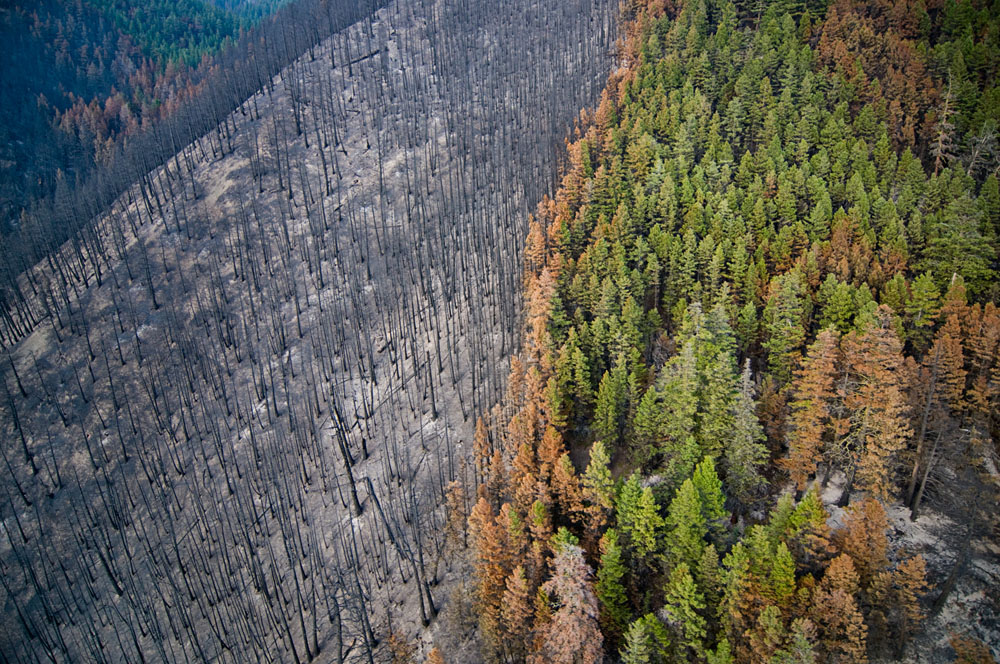 To stop the fire the helicopters drop fire-retardant. On the picture one can clearly see where the retardant was spilled. 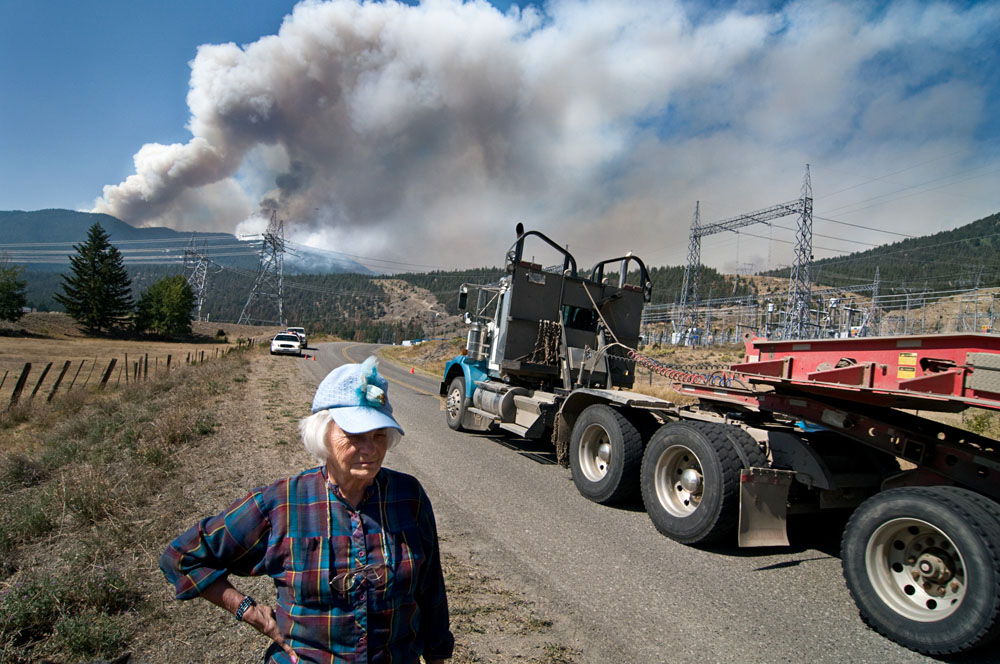 A evacuee watches the fire from a distance. The power station in the background provides 50% of Vancouver with electricity. 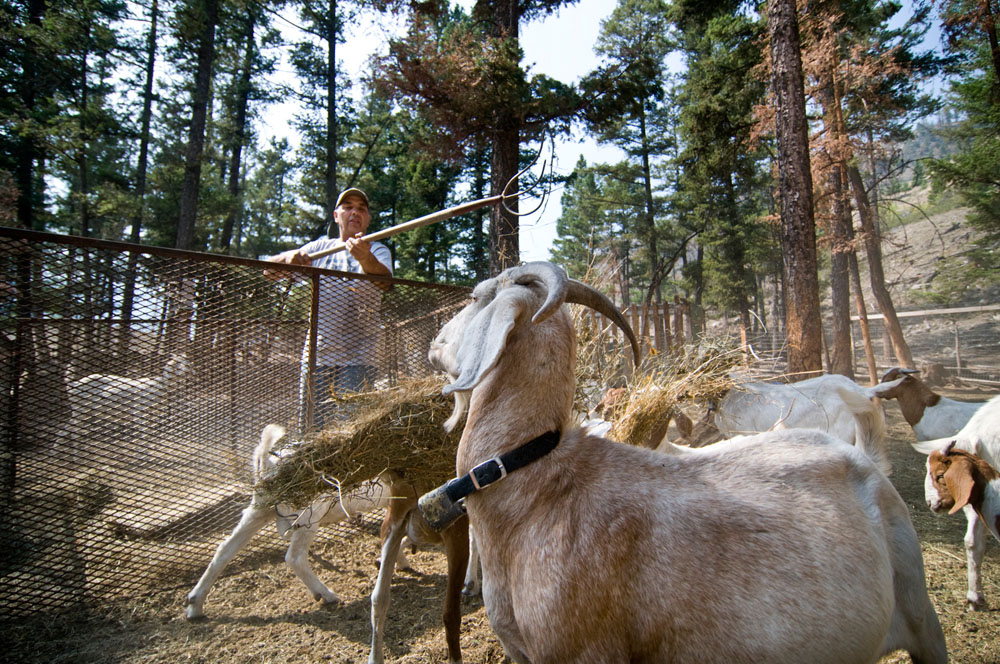 A local farmer feeds his goats before being evacuated. 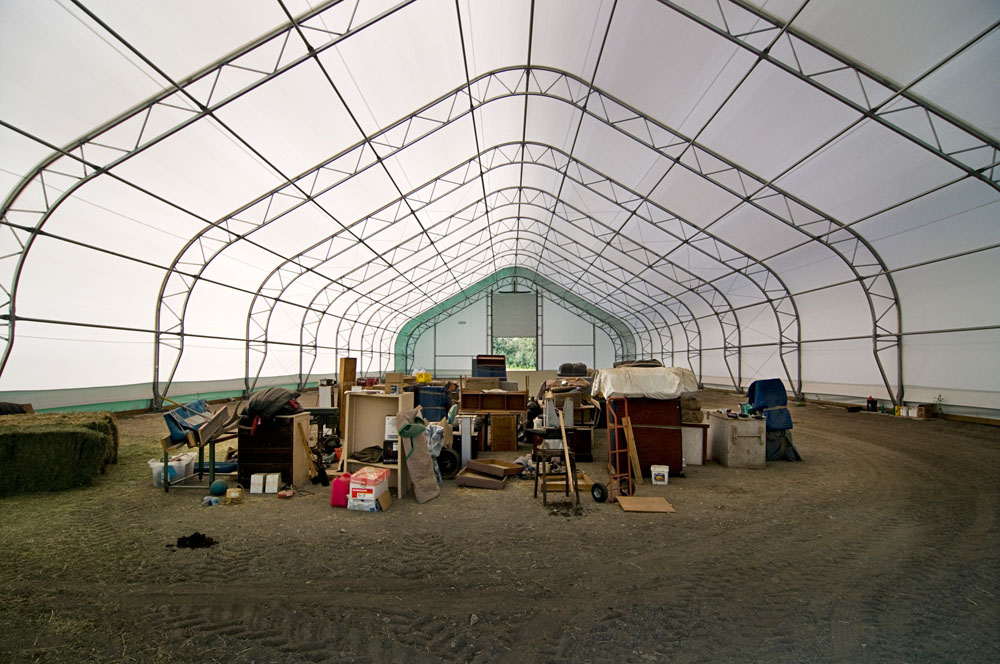 locals hunkered down some belongings in a indoor riding arena. 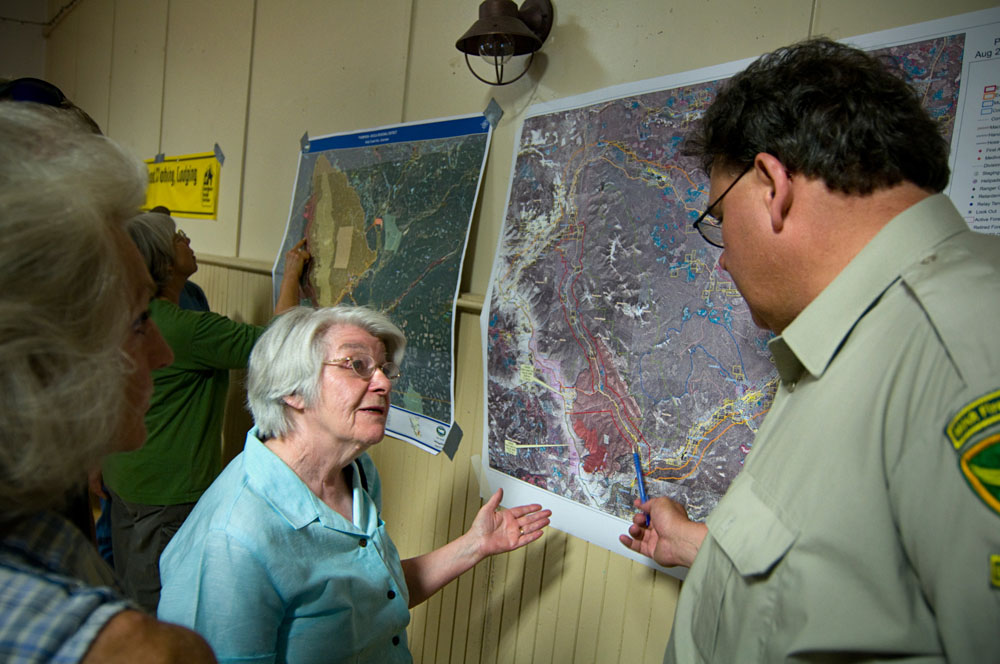 The chief executive explains the fires development to some of the evacuees. Every second night there was a public meeting at the community centre of the closest town. 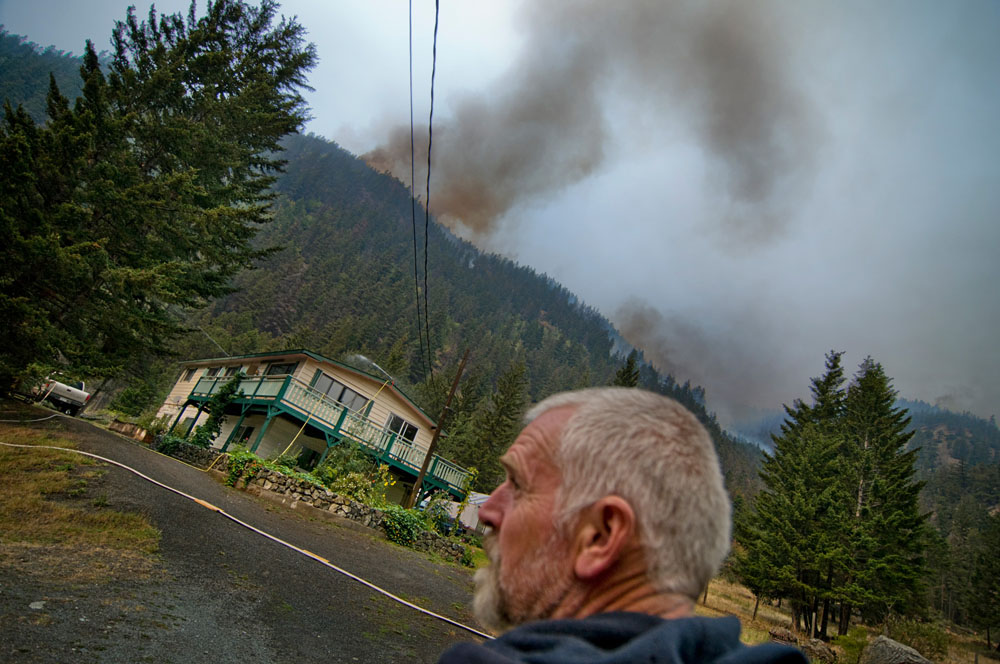 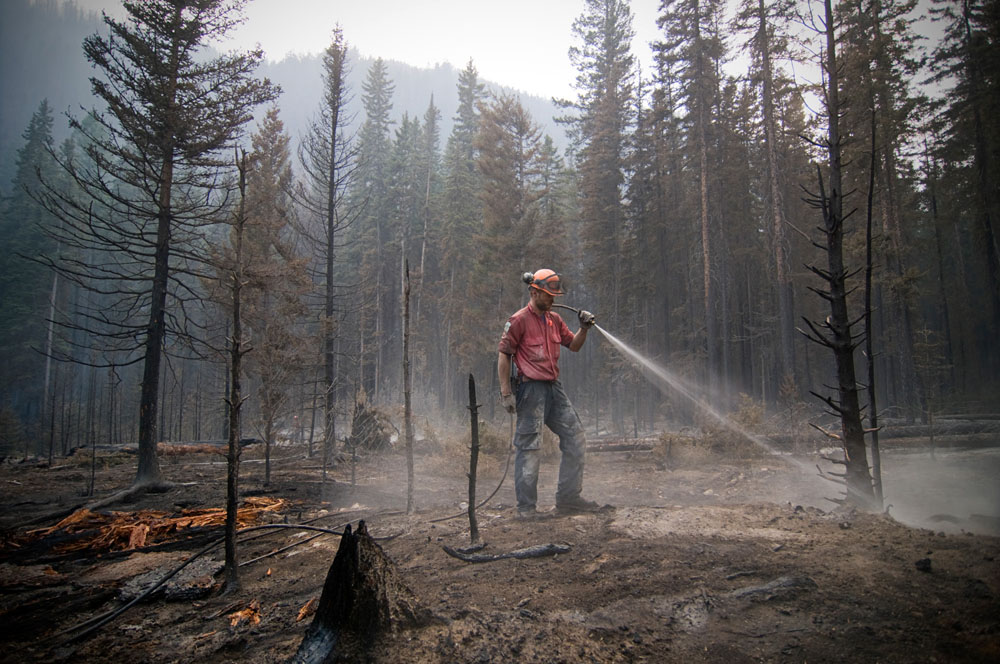 A firefighter is trying to eliminate the fire that got close to a residential area. 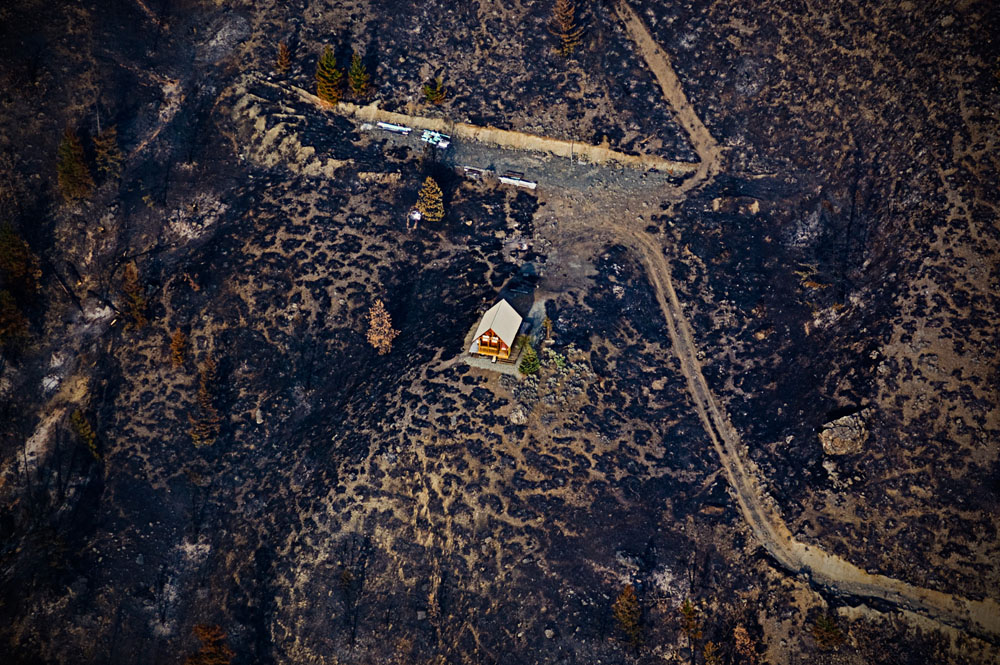 A house that survived the fire storm. 2009 was the busiest fire season for decades. 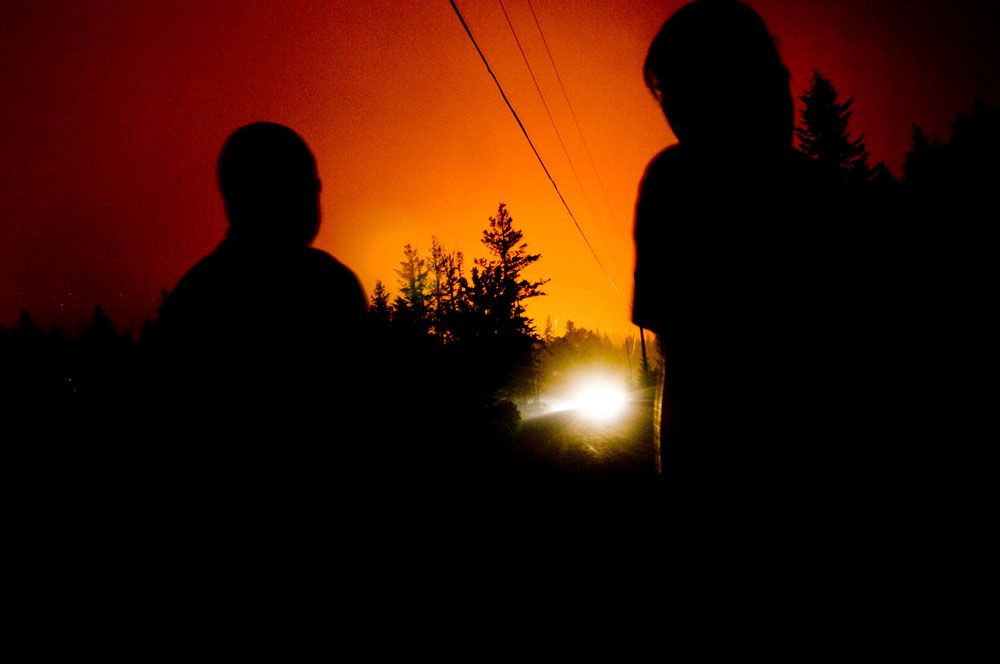 After a long day, two firefighters are looking at the burning sky. 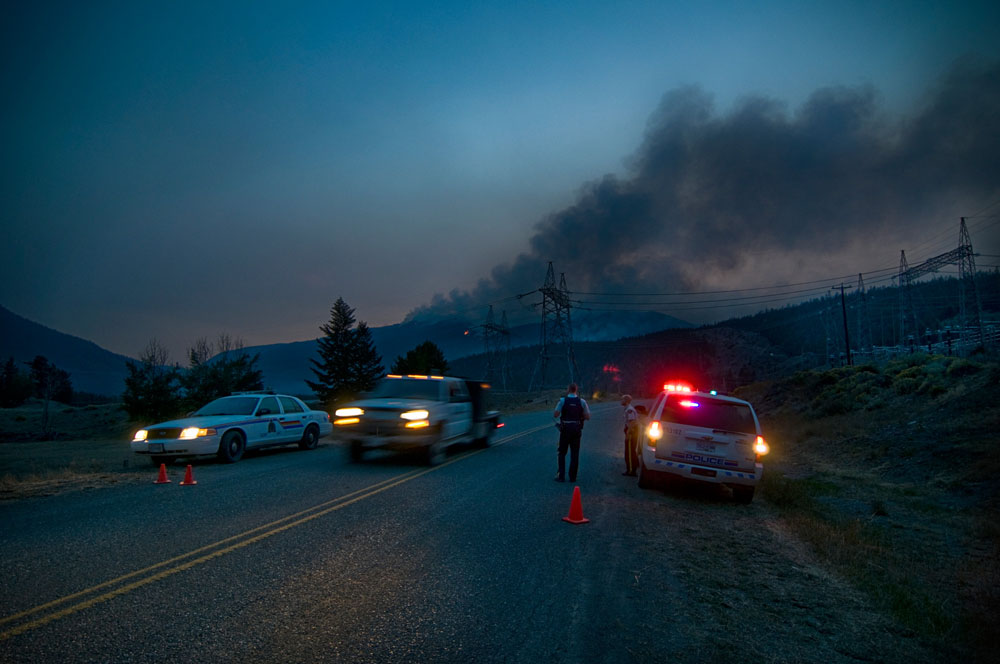 One of the many police checkpoints. Without permission it is not allowed to go closer to the fire than a few kilometres. 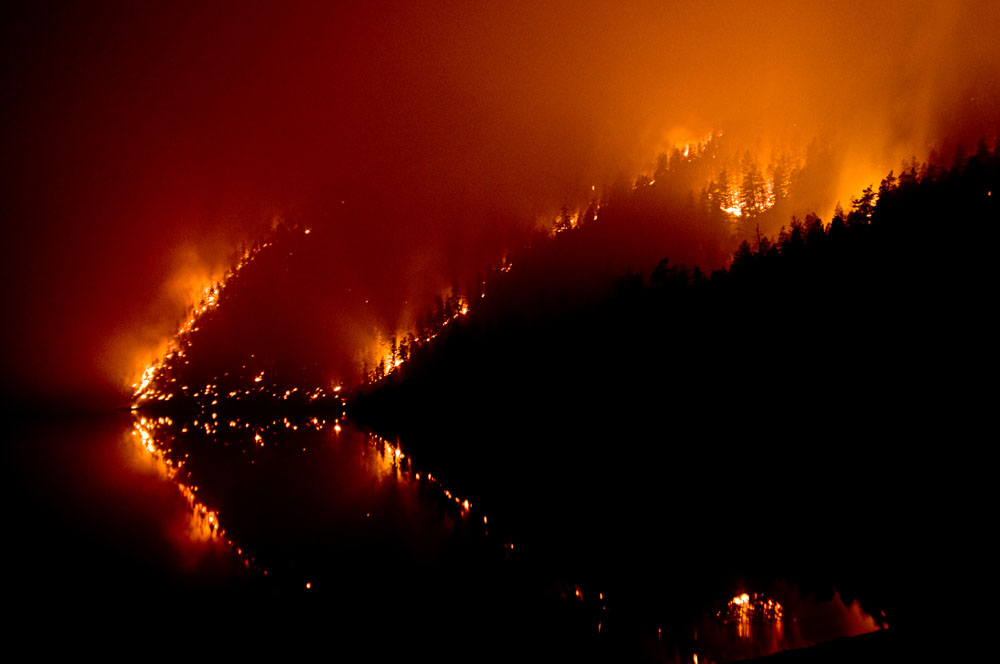 Reflections of the fire at the Kelly creek. The fire was named after this lake.

From the helicopter, the mighty Canadian forest, looks like an ocean of burned matches. Once the fire starts burning it is almost impossible to stop.

In the memory of many firefighters the year 2009, will remain as one of the busiest of recent decades. At the beginning of September the British-Colombian firefighters had already dealt with 2000 square kilometers of burned forest. At this point the 'fire-season' was far from being over. The extreme heat and dryness created perfect conditions for fire to spread at a rapid speed.

The 'Kelly creek fire', approximately. 5 hours north of Vancouver, burned an area larger than the size of 200 square kilometers. About 100 firefighters, 14 helicopters and 24 bulldozers struggled for months, trying to get the fire under control. Many local residents had to be evacuated. However, no lives were lost, only a number of buildings.